Supper In the Orchard with Chef Derris Warren (Sold Out)

Chef Derris Warren is a 25-year-old executive chef at London Belle, in the Fairfield Inn and suites.

Regina born Derris, started his career in high school. Where he competed in Skills Canada, winning one silver, and two gold medals at the provincial level, and represented Saskatchewan twice at the national level. Derris started his culinary apprenticeship at The Willow on Wascana, he later moved around to work and was mentored by some of the top chefs in Saskatchewan. At age 20, he finished his apprenticeship and received his red seal certification. Since then Derris has worked as Chef de Parti at the Double Tree by Hilton and as the Sous Chef at The Hotel Saskatchewan.

Chef Derris has a passion for fresh local food and is a proud supporter of the snout to tail movement. Derris is known for preparing classical dishes with a modern twist. As well Derris enjoys cooking rich braised meat, and vibrant sides. They are often featured on his pub-based menu at London Belle. 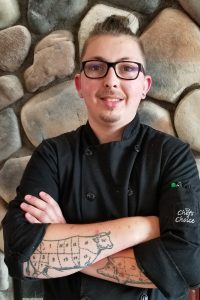