Most trees need to be planted in an area that has full sun so that the fruit will ripen properly. Do not plant in low lying areas where water and frost can collect. Keep in mind that the 1′ tree you buy may grow 40′ tall and 15′ wide at maturity. 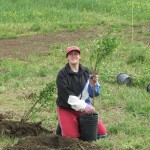 Dig a hole that is twice as wide as the pot the plant is growing in, and at the same depth as the pot. With the soil that was removed from the hole, mix in compost, well rotted manure, and/or peat moss. A more environmentally friendly alternative to peat moss is coconut coir, which collected from the husk of a coconut. Water the plant in the pot very well before carefully pulling it out. If the roots are all bound up together, gently pry some of the roots apart. Put the plant in the middle of the hole, fill with the dirt/compost mixture and tamp down with your foot around the plant to create a slight depression in the soil which collects water when it rains. Water very well.

If you put compost or rotted manure in the hole, additional fertilizer will not be necessary in the first year. In early spring apply compost, rotted manure, or an organic fertilizer, but do not apply fertilizer after the beginning of summer as this will keep the plant growing in the fall when it should be shutting down for winter. 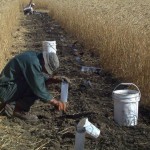 Water well the first couple months after planting, and after that the general rule is 1” of moisture per week. Unless in a severe drought, stop watering in mid summer,  again to prepare the plant for winter. Just prior to the ground freezing, water the tree. This will ensure that the plant has moisture to help prevent drying over the winter. 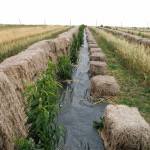 Bark mulch works great for a year but needs to reapplied and weed seeds will land on top of the mulch and start growing. High quality landscape fabric is a great alternative, although in the first couple of years you may have to lift the fabric up in the spring to put more compost on. Once the tree gets mature, you can put the compost around the fabric, as the roots will be out that far anyways. Having a mulch will prevent evaporation and the plant will require less watering. 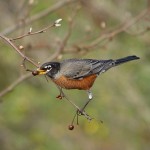 For birds control, bird netting works well, but ensure that it is secure to the ground with no openings because the birds will get in. There are some organic products that can help in the battle with insects such as homemade insecticidal soap (3 drops of mild dish washing liquid, 1 tbsp cooking oil in a quart of water), and even a blast of water can remove pests. Natural predators such as the lady bug can be your best ally in the battle, and you can even order the predator insects on-line. 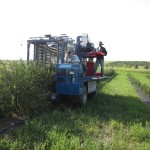 The biggest mistake people when picking fruit is not waiting until the fruit is fully ripe and then wonder why it is so tart! The Prairie Cherries are not harvested until the skin is almost wrinkled; so much flavour and so much natural sugar! Pick the fruit in the morning when it is cool. After picking, clean and wash the fruit, then store in the refrigerator until you are ready to eat.