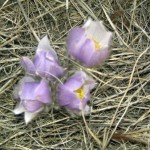 There is a myth that organic growers wish to return to the horse and buggy era, using primitive tools and methods, are anti-technology, and as such anti-progress.  That just isn’t the case.

I endorse any technology that has a definitive positive impact on society, but doesn’t come at too high of cost in terms of the environment and sustainability.

Growing up in the city and working 13 years as a computer consultant, it is in my DNA to get a kick out of the new gadgets and toys and using it to create a better life.  But instead of new graphics cards, CPU’s and programming languages, I now delve into building solar water heaters, greenhouses built into the ground, and LED lighting.

As an example, researchers have mapped out the genome of the almond plant, and we can identify the gene that tells us if the plant is self fertile, meaning you don’t need another almond tree to pollinate it.  For fruit breeders such as myself, this is huge.  Normally we would have to grow the plant out for 5-7 years just to see if it was self-fertile, now we can find out after 2 months.  This technology has no threat to the environment, no safety issue with our food.  However, if we were to use the information from the genome to be able to insert genes from a frog into the almond to create some desirable characteristic, that is where I have the problem.

While organic growers don’t wish to return to the horse and buggy era, we understand that unless society makes drastic changes to our unsustainable methods of producing food, we will end up there.  Not because we say it will happen, but because we will have run out of fossil fuels; that simple.  The quicker we face this reality, the easier it will be to make the transition.